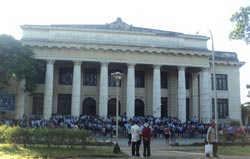 One image repeated itself in Camagüey and across Socialist Cuba this morning when over 2 million students attended classes in a country which enjoys complete safety for the proper development of the new school year.

Without paying any fee, parents in Camagüey sent their children, over 127 300 of them, to fill the classrooms of some 711 schools, from elementary to pre-university level. Being the latter a level where the number of schools has raised up to 26 centres, well above the number of senior high schools this province had before 1959 which were only two of them.

The polytechnical education, attuned to the current need of updating Cuba’s economic model, also received a great deal of students in this portion of the westernmost country of the Caribbean.

Likewise, hundreds of future professionals were received on Monday by the higher education institutions of this province, totalling six, all of which were created by the Socialist State.

The curriculum resources, insanely expensive and sometimes none existent in many parts of the world, for which students take to the streets to demonstrate in many countries are completely guaranteed in Cuba. Many of these resources are bought abroad for which the Cuban State has to disburse large sums of currency reserves and, of course, bypass the hurdles imposed by the US blockade on the island nation.

In spite of that, the 2012-2013 school year kicked off in this Cuban province where hundreds of thousands of students wearing their uniforms provide a colourful and beautiful mosaic of diversity to the old and legendary city of Camagüey.