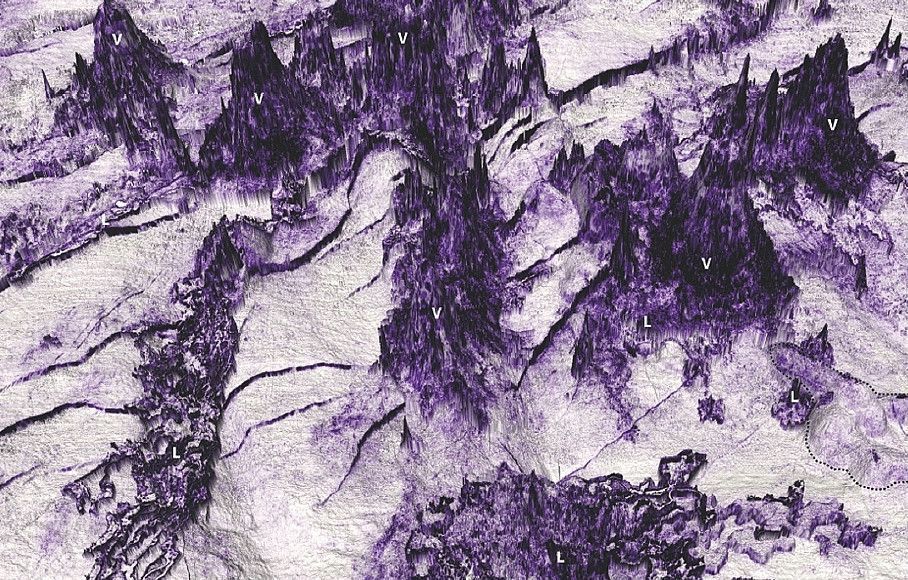 Submarine volcanoes discovered with the geo-mapping technique.A group of investigators found 26 volcanoes formed millions of years ago under the sea, to the south of Australia. The discovery was made possible thanks to a geo-mapping technique that uses seismic waves to measure underground structures by 3D seismic reflection

The team, which belongs to the University of Aberdeen (Scotland) and Adelaide (Australia) and supported by the Commonwealth Scientific and Industrial Research Organization (CSIRO), Australia, conducted a study using a technology similar to that used for the production of ultrasound images of babies.

Mordor at the bottom of the sea

The group of volcanoes detected by scientists dating back to 35 million years ago and reminds the fictional country of Mordor in the trilogy "The Lord of the Rings". The volcanic terrain has 34 km in length and 15 km wide, while some volcanoes reached a height of about 625 meters.

In the field that appears in the images are formed by a series of volcanic eruptions on the seafloor, within walking distance of the south coast of Australia, in the so-called Great Australian Bight, a large open bay.

"By using data collected as part of oil exploration efforts, we have been able to map these ancient lava flows with unprecedented detail, revealing a spectacular volcanic landscape that reminds us of "The Lord of the Rings," said Dr. Nick Schofield, of the School of Geosciences of the University of Aberdeen, co-author of the study.

A new technique to study hidden worlds due to its apparent inaccessibility, lava flows submarines are more difficult to study than those found on the surface of the Earth. With the help of this newly developed technique, scientists can carry out a detailed analysis of a landscape that has remained hidden for millions of years, which also highlights the growing importance of seismic data in the study of submarine volcanism. (Taken from Https://cdni.rt.com)