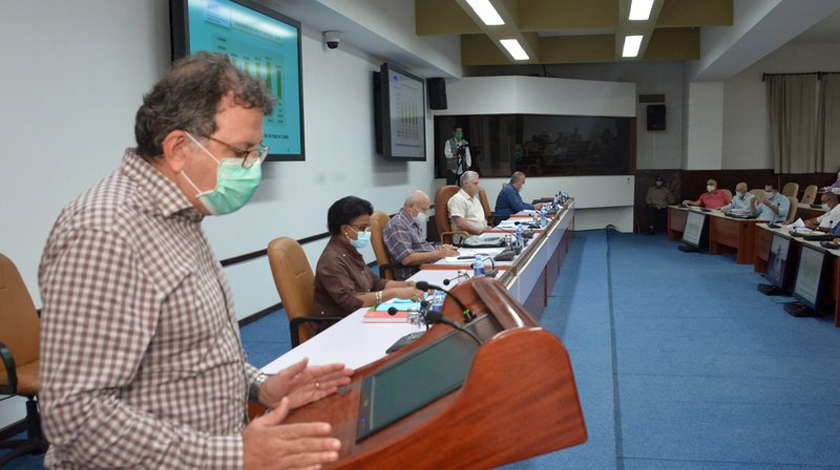 Havana, Sep 29.- During the recent meeting between the President of the Republic, Miguel Díaz-Canel Bermúdez, and the Prime Minister, Manuel Marrero Cruz, with scientists and producers who participate in the Food Sovereignty and Nutrition Education Program, it was presented a transgenic hybrid corn project.

The Deputy Prime Minister, Inés María Chapman Waugh, moderated the meeting in which the characteristics of the seed were explained, in whose obtaining, field tests and expansion participated various research institutions and production bases, under the leadership of the Center for Genetic Engineering and Biotechnology (CIGB).

Mario Pablo Estrada García, Director of Agricultural Research at the CIGB, explained that they worked with the seeds with the best potential worldwide and that this gives the country greater sovereignty, as it is its own technology.

This achievement will begin to be applied on a larger scale, destined for animal feeding, it was proven that it obtained a better yield than what has been achieved so far with island cornfields, and this was corroborated by the first private and state producers to cultivate it.

The potentialities of this transgenic hybrid of the CIGB are between nine tons per hectare in optimal conditions, for example, Luís Martínez, producer of the municipality of Perico, Matanzas, worked during the research process with various varieties, among them a Vietnamese hybrid and the CIGB seed, which, he said, is one of the best.

The production of the corn in question is in accordance with the provisions of the legal framework that governs the development and use of genetically modified organisms (GMOs) in Cuba, this version of the CIGB specifically, derived from two improved Cuban corn lines obtained by the national science, one hybrid and one transgenic.

As a result, it is resistant to corn moth, a pest that mostly affects these crops on the Island, and to the herbicide most used to control weeds, likewise, its production does not present exceptionalities since it requires the same technological package (inputs and other products) required by those already planted in Cuba.

Likewise, at the meeting the use of GMOs was debated, on which Díaz-Canel pointed out that in the country “we have to work with several alternatives at the same time, each one in its own setting, in its scope, and with all of that go moving forward, and neither denies the other, on the contrary, and the issue of agroecology is one of the things that we are promoting ”. (Text and photo: ACN)