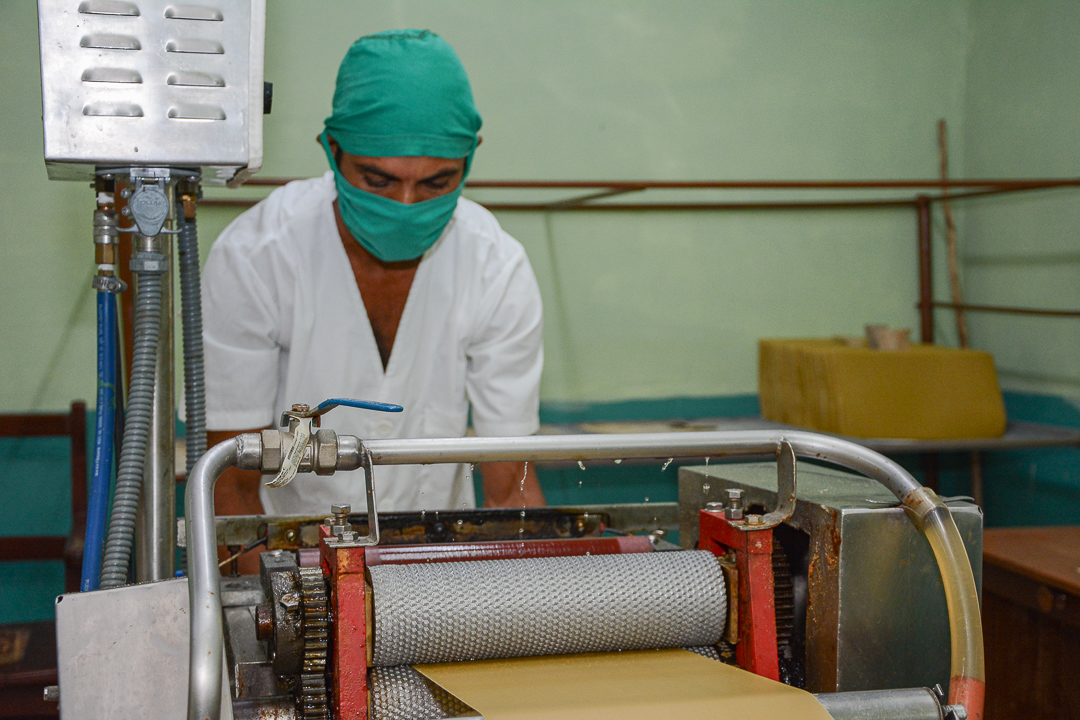 Camagüey, Oct 24.- The start-up in Camagüey of an automatic wax stamping-laminating machine, with a production capacity of 1,000 sheets a day, constitutes an important step in the modernization of the beekeeping industry in the province. These sheets printed with hexagonal figures in relief on both sides are placed by beekeepers in wooden frames inside the hives, from which the bee will build the cells that it will use for breeding or for depositing honey and pollen.

The introduction of this technology has among its main advantages the use of recycled raw material, which allows an increase in the production of honey and reduces the time for castration. Bees in their natural environment need between five and seven kilograms of honey to obtain one kilogram of wax and to make a honeycomb, approximately a week; provided there is a good collection of nectar.

In the process to make the stamped sheets, the liquid wax, obtained from the aged honeycombs, is poured into a hopper, from where it passes through a dosing system and falls onto a conveyor belt, in which the sheet is formed and cooled; It is also in charge of transporting the wax sheet formed towards the stamping rollers where the cells are finally engraved.

As Omelio Barba Alonso, director of the Base Business Unit (UEB) Apícola Camagüey, explained to Adelante Digital, the current manufacturing meets the demand of the 255 beekeepers in the territory. Before the installation of the machine, they were brought from Sancti Spíritus or Contramaestre, and they could not supply the 17,228 hives that the demarcation has. "The aspiration we have is to increase the stockpiling of wax to grow in the production of sheets with a view to export," he said.

The UEB from Camaguey is recognized in the country in the last three years as the one with the best comprehensive results and the fourth in volumes of collected honey. It has 44 production bases, mostly in the private sector, to which 99% of the existing hives in the province belong. ( Yurislenia Pardo Ortega / Adelante) (Photos: Leandro Pérez)