Security and trust in the Revolution, always 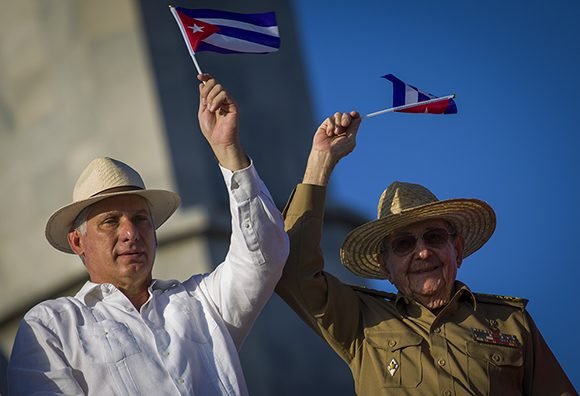 With logical expectation, but with the greatest confidence, we Cubans welcomed the long-awaited announcement on transcendental issues of national life; and I say confident because we were sure that they would not be shock measures that could affect the human and beneficial programs of the Revolution.

That security grew when together with President Díaz- Canel was Army General Raúl Castro Ruz, first secretary of the Central Committee of the Communist Party of Cuba, to, as always, face the challenges of the moment with the people.

The beginning of the Ordering Task constitutes a challenge and a necessity in the effort to keep alive and in full development the conquests of the Revolution, and its wide universe of popular benefit; just as the United States' commercial and financial blockade against Cuba is intensifying, in a fierce farewell to the twelfth tenant of the White House, and despite his failed aspirations to destroy the nation.

This stage emerges from the process of transformations that the country is carrying out for more Socialism, which is to say improvements for all, without distinction, including those, and their families, who make mercenarism and terrorism a business encouraged by the neighbor to the north. Even they know well that here there will be no massive layoffs or budget cuts for education services at all levels, and much less in public health; more so now that he is facing a pandemic, to what is put what there is and what there is not, as they say in "good Cuban."

Díaz- Canel pointed out in his appearance that “as always, we will be receptive to the criteria of the population. The conditions have been created to ensure that no one will be left helpless and that shock therapy will not be used against the people in socialist Cuba”.

It was immediately known that as part of the monetary order, the single exchange rate will be 24 Cuban pesos for one dollar; something that will help put a stop to abusive and speculative prices, very fashionable these days, and which becomes a substantial component of the plans of those who want to hinder the advancement of the inclusive society that we build.

Keep in mind and clear what was stated in the words of the President of the Republic when he stated that “the task is not without risks. One of the main ones is that there is higher inflation than designed, due to the supply deficit. Abusive and speculative prices will not be allowed. They will face socially with containment measures and severe sanctions for non-compliant”.

A new convocation of the Cuban leadership is present that we must support and participate in its materialization, along with another important and strategic group of actions, for which it represents us in the personal, family, social and present and future security order. (Photo: File)