Mijaín and Idalis heading representation of Cuba for Tokyo 2021 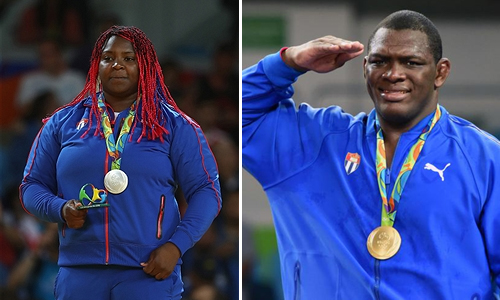 Havana, Jan. 1.- The Greek-style fighter Mijaín López Núñez and the judoka Idalis Ortiz Bocourt could be the standard bearers of Cuba in the 2020 Tokyo Olympic Games, postponed to 2021, after the mandatory nature of couples to carry the national flags of the participating countries.

Recently Ortiz, number one in the Olympic and world ranking of his category, declared via Facebook to the Cuban News Agency (ACN) that, if that possibility were fulfilled, it would be a great honor and a personal commitment and with my people to continue reaping successes.

In the midst of several Cuban athletes of Olympic and world quality, many agree that Mijaín will be the designated one, and very few doubt that Idalis will accompany him, as well as that both will be on the awards podium.

Thomas Bach, president of the International Olympic Committee (IOC), announced last March that in the Japanese event all nations will have the imposition of having two flag-bearers at the opening ceremony, male and female, in order to launch the gender equality in sports

For López, a four-time champion under five rings, it would be the fourth time that he had the honor of carrying the flag in his hands, as he did in Beijing 2008, London 2012 and Rio de Janeiro 2016, while for judoka Ortiz, with three Olympic medals (1-1-1), it would be the first time to carry the banner.

Coincidentally, both are from Pinar del Río, the first, 38 years old -August 28, 1981-, was born in the Herradura neighborhood, Consolación del Sur, while the second (31 years old -September 27, 1989-), in Candelaria, a municipality that now belongs to the current province of Artemisa.

Another curious coexistence is that both compete in the major weight divisions of their specialties, since López is the super complete (130 kilograms) of the team, and Ortiz that of his (more than 78 kilograms). (Text and photo: ACN)